It's not every day you get the opportunity to drive an airboat through alligator-infested swampland, or actually get close enough to feed an alligator by hand, but during a recent visit to the Gulf Coast Gator Ranch, I got to experience both of those things and a lot more.

The Gulf Coast Gator Ranch, located on 105 acres of wetlands at 10300 U.S. 90, Moss Point, is where you can find some of the oldest and largest alligators in captivity. Family owned and operated for the past decade by Alan Adams and Curtis Silver, the Gator Ranch offers walking tours along protected walkways, as well as high-speed airboat tours in the wild.


My day began by meeting Clifton Thaggard, who told me he runs things at the ranch, from driving the airboats, to conducting the 'gator tours and sharing educational information, as well as fixing anything that breaks down.

"We don't kill the alligator for any reason, for the meat, the hides or things like that," he said. "We actually order that stuff from Louisiana."

The alligators held in captivity at Gator Ranch can be found in a fenced-in area surrounding a large pond.

Thaggard said about 70 alligators are currently housed in there, ranging from 6-to-14-feet in length, with some of them most likely 80 to 90 years old.

The pen is where the 'gators are bred and kept until they are old enough to be released into the wild, although some of the "nuisance gators," ones that they had to capture from people's homes and public land, are kept there permanently. During a walking tour you can feed these alligators by purchasing what they call "Gator Chow," which is similar to pure protein dog food, and they'll come right up to the banks for it.

While I was content to stay behind the fence safely away from those large alligators, Thaggard did show me an up-close and personal look at some of the juvenile ones. He suggested that we start off by visiting Squirt, a baby alligator that guests can hold in their hands. While his jaws are safely wrapped together to prevent anyone getting bit, you still have to be careful, as I learned. Squirt has a fitting name when I noticed a yellowish liquid running down Thaggard's arm after he held him. Seeing the look on my face, he said it wasn't a big deal, "Oh, that's just a little Gatorade…"

We moved on to the pens that house numerous 2-to-3-year-old gators, and then got inside one of
the areas that held about a dozen 4- to 6-year-olds.

Being alligators generally grow about a foot a year for the first five or six years, and none of them had their mouths wrapped closed, these were quite a bit scarier than little Squirt.

As we entered the pen, I asked Thaggard if he had ever been bitten before. He said he's probably been bitten 16 or 17 times.

"If you're in there playing with them you're going to get bit," Thaggard said. "There's nothing you can do about that."

While I was careful not to get close enough to them to get bitten myself, I did get near enough to take a selfie while inside with potentially dangerous reptiles.

Up next, Thaggard introduced me to a new airboat driver he trained, Kyle Bryant, who was to give a tour to view alligators, birds and marine life in their natural habitat.

"Just try to bring him back," Thaggard yelled out as we left with a couple other visitors for our 30-minute journey.

Slowly moving our way through water canals, Bryant explained a large variety of facts about alligators, sharing their eating and mating habits, and answering any other questions we had.

Once we arrived at the more open water, it was time for what Bryant called the "fun," as he hit the gas and we raced along the water, gliding and spinning around at speeds reaching about 50 mph.

After having our fun, we headed back to the dock where along the way I had the opportunity to feed by hand an alligator that was swimming along side the boat.

Bryant had a bag of marshmallows ready for the occasion.

"They come straight for the marshmallow every time," Bryant said, explaining they are attracted to the color white.

Once we got back, I asked Thaggard if I could try my hand at operating the airboat. While not normally something guests can do, he graciously gave me a quick crash course on how to handle things, and after initially getting the boat without brakes stuck alongside the embankment, I had an exhilarating experience of doing fast 180-degree spins on my own.

I ended my day at the ranch having the opportunity to meet with Andy Riffle, one of "The Gator Boys" from the hit Animal Planet reality show, who's at the Gator Ranch through August showing alligator wrestling demonstrations daily.

Wrestling alligators for the past 14 to 15 years, Riffle presents a family-orientated show that is educational and entertaining.

Performing in front of a pit that holds alligators ranging from 7-to 9-feet long, I watched as Riffle waded into the water to pick out a gator to wrestle.

Grabbing one by the tail, he dragged it out of the pit, and then proceeded to do what he called "working the alligator," moving around him, making him spin and jump, so that it's worn down enough to jump on its back. Although Riffle joked, "Most of the time it has the other effect. I get more tired than he does."

When Riffle eventually got on the back of the large alligator, I had another opportunity that the general public normally doesn't get when he invited me inside the enclosed area to take a photo next to him.

Feeling brave knowing I was with a professional, I gently placed my fingers on the tip of the gator's mouth while Riffle held it tightly closed, making a photo memory I'll never forget.

To top off my alligator-filled day, on the way home I stopped at Gulfport's Back Bay Restaurant and ordered a plate of tasty Gator Bites, figuring it would be the perfect dish to celebrate not losing any fingers.

The Gulf Coast Gator Ranch & Tour offers exciting, as well as educational adventures that the entire family will enjoy. Located at 10300 Hwy 90 in Moss Point, the ranch is open seven days a week, most days of the year. Andy Riffle of The Gator Boys alligator wrestling shows run daily throughout the summer. For more information, please call 866-952-2887 or visit: www.airboatswamptoursofmississippi.com 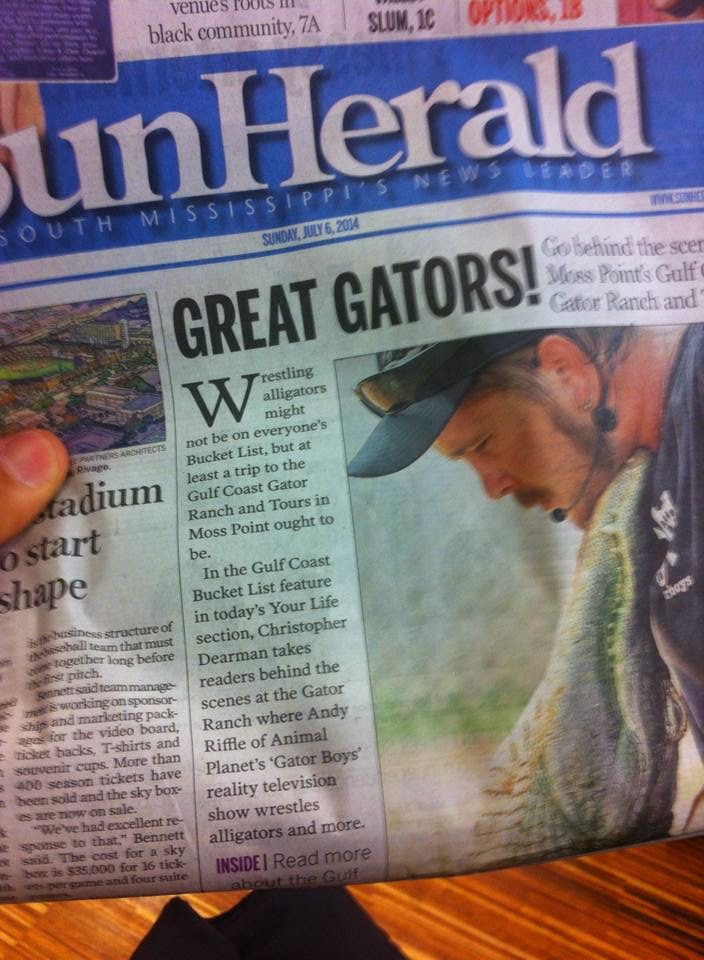 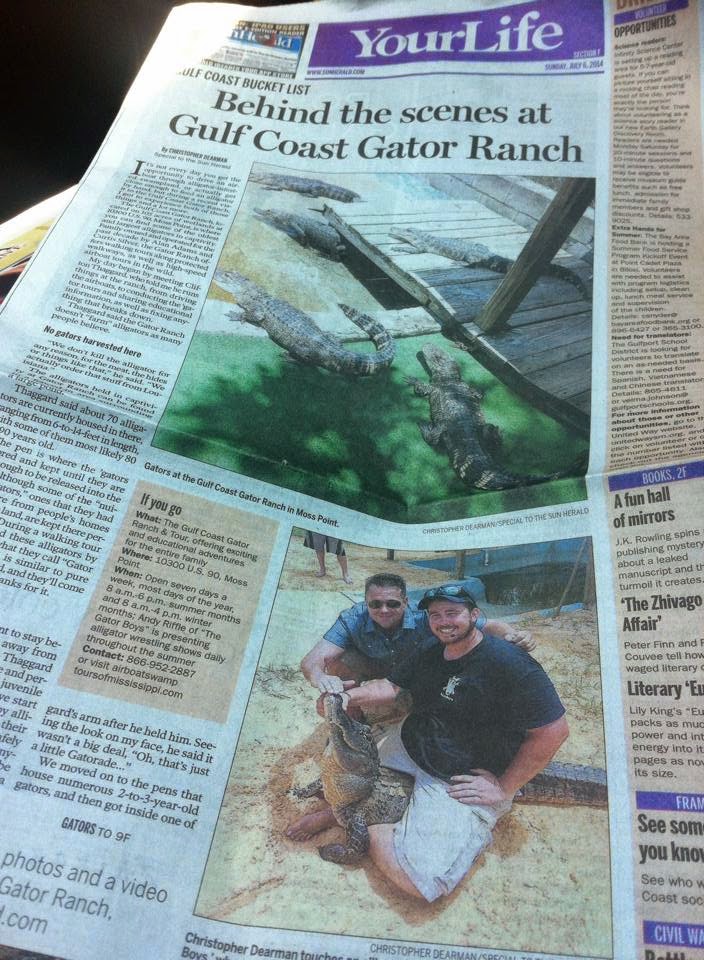