Deeply hidden somewhere on the Gulf Coast is the secret laboratory of a mad-genius engineer who constructs devices such as time machines, portals, weather machines, Tesla guns, and is protected by an army of minion “Steambots.” While some might view this as cause for concern, I’ve been assured that the reclusive Dr. von Walrod, the alter ego of a local artist who creates fantastical contraptions from bits and pieces of things that some might consider junk, only uses his inventions to ensure safety from those that are after him and his highly coveted apparatuses.

Walrod describes steampunk as science fiction combined with a Victorian era esthetic. He accomplishes this with his art by using items such as old clocks, radios, gauges, meters, and other metal parts that often aren’t wanted. For instance, Walrod told me: “Nobody uses brass candlesticks anymore. Nobody wants them. So, I turn them into art.”

I asked Walrod, who graduated from and whose day job is one of an electrical engineer, if art was something he always was interested in. He told me: “Not so much an artist, but a craftsman. Ever since I was little I wanted to build things. So, when I was in high school I was tearing televisions and radios apart and building circuits.”

From there, Walrod eventually found woodworking, and between building his own custom furniture, as well as restoring antiques, he’s also become an antiques dealer. This works out nicely, for its during his hunt for antiques while frequenting yard sales, flea markets, estate sales, and salvage shops, that he also keeps his eye out for inexpensive items that don’t have intrinsic value as an antique, but will be perfect for his art.

While only creating steampunk art for about two years, Walrod figures he’s already acquired close to ten thousand components that he repurposes for his hand-tooled creations. One of his favorite ways of procuring people’s unwanted metal items though, is having them delivered: “The reputation gets out that you take old stuff like that and people start bringing it to you by the boxes!”

With help from his ever-growing collection of miscellaneous items, Walrod says he’s been inspired to produce a couple hundred steampunk pieces to date, selling over a hundred of them. After factoring in the materials cost and time spent working on it, he prices his art anywhere from $10 for the very small stuff, up to $500 for larger items like his favorite to make, the minion Steambots.

Playfully geared to both young and old, the back-story of the steampunk world that John created plays a big part in its popularity. He told me: “Part of the mystique with this is, the artist that is advertised to the public, is Dr. von Walrod.”

Dr. von Walrod is the character behind creating the whimsical Neo-Victorian machines, including his army of protective Steambots. It is said that the doctor’s demented inventions are sought by weird scientists, evil organizations, superheroes, and diabolical governments all across the planet, and while I was hoping to get a closer look myself at where these highly desired items are created, I was told my tour of the secret lab would have to wait for later date. I guess Dr. von Walrod can never be too careful who he lets in on his whereabouts.

Luckily, the Steampunk Curiosity gallery can be visited by anyone. Located in Century Hall at 112 S. in Old Town Bay St. Louis, you can view a rotating variety of steampunk creations, as well as see some of the pieces that helped John Walrod win last year’s Peter Anderson Award for the Creative Arts.

The official grand opening reception for his gallery space is tentatively scheduled for this May’s Second Saturday Artwalk. For more information and photos of his work you can visit: www.facebook.com/SteampunkCuriosities 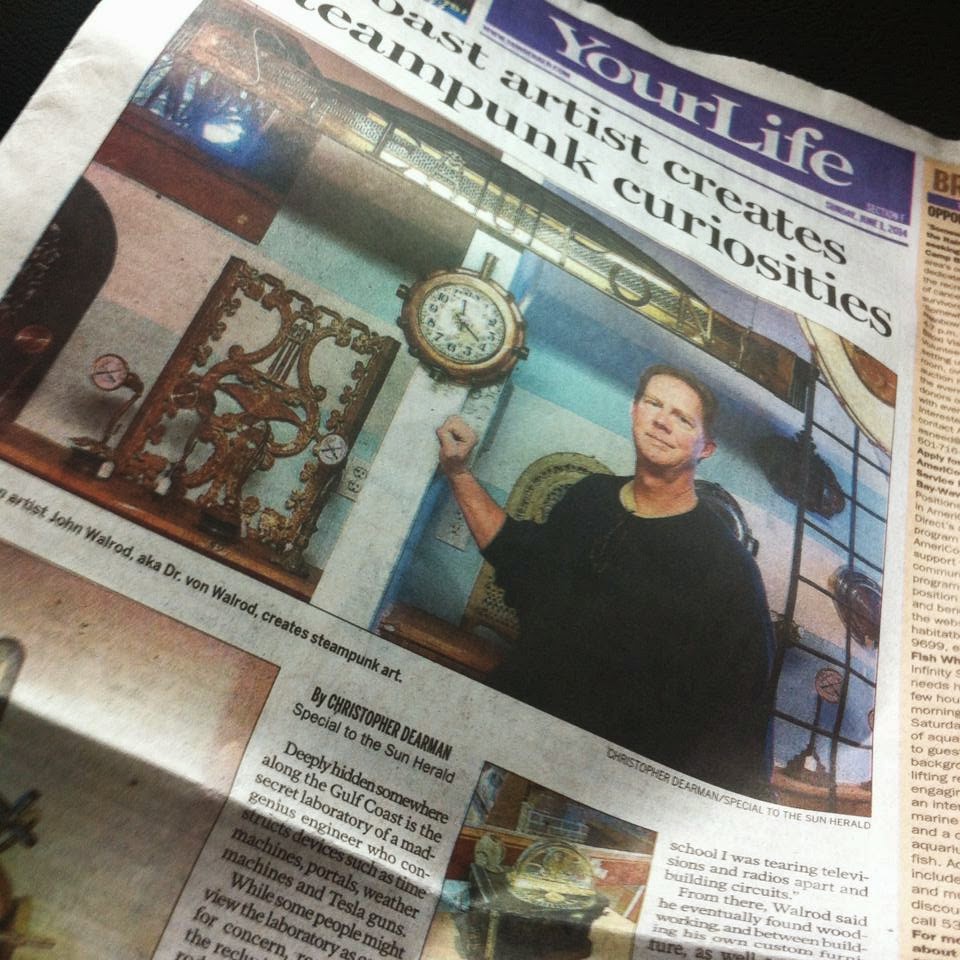