Not having strapped on a pair of roller-skates in nearly three decades my only wish when participating in a Mississippi Rollergirls Boot Camp was that I wouldn't end up hospitalized.

Thankfully, a visit to the emergency room wasn't required, but after having to nurse a variety of bumps and bruises I'm confident I won't be strapping on the skates again anytime soon.

The Rollergirls competed in their first match in 2007 and were a traveling team until January 2008 when they found a home at the Harrison County Skate Park in Gulfport. For six years they held practices, hosted charity events and competed in games and tournaments there until the county changed the venue's into a movie production studio.

The Rollergirls found a new home at the Duo Dance Event Center in Gautier, which is where I received my introduction to the world of women's roller derby.

If you don't have your own equipment, they have a limited supply of spare gear that is available to borrow on a first-come, first-serve basis.

I arrived at the event center this past off-season anxious to learn about a sport of which my only familiarity was from watching televised bouts as a child. Those events often showed skaters getting knocked over railings and punching people in the face, so I wasn't sure what to expect when I got there.

After signing a lengthy liability waiver, I tried on some borrowed gear. 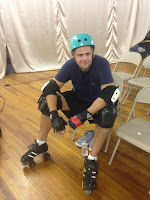 Ashley "Princess Smashley" Adams then told me to remove it, as we wouldn't be wearing skates for the first part of camp.

"Boot camp," I quickly learned, was more than just a figure of speech.

Adams told us to run three laps around the track for a warm-up. Once we got the heart racing, she immediately led us into doing a series of calisthenics, which consisted of high-knee skipping, long jumping, twisting and turning, and performing other skater-type movements while moving across the floor.

At this point, I started to get a little winded, but I soon learned the hardest part was yet to come. Up next, an exercise called "Sparkles," in which you press your back against a wall and then drop to a sitting position without a chair.

While participants were in the sitting position, Adams called out a long word that participants would have to spell out. We did that twice for 30 seconds and the last time for 45 seconds, each time taking turns calling out the next corresponding letter of her chosen word.

I toughed it out because I did not want to look weak in front of a room full of women who showed no signs of struggle with the exercise, but my thighs were absolutely burning by the end. I kept my game face on, however, even though I was starting to have doubts that I would even make it to the skating part.

"Oh, I should have told you," said Adams, with a chuckle, after the exercise. "If it was too painful, you could stand up for a 3-second rest."

Now you tell me, "Princess Smashley," I thought, grimacing slightly as I watched her walk away.

Thankfully I got to sit in a chair and relax briefly while putting my gear back on and listening to Scarlet "ScarJo Ego" Cox explain the rules.

The goal of roller derby is to out-score the opposing team, and there are five skaters from each team on the track during a "jam," which can last up to 2 minutes.

Each team designates a "jammer," who scores points by lapping skaters of the opposing team. The teams are playing both offense and defense simultaneously while in a "pack," blocking the opposing jammer and assisting their own. At the end of two 30-minute periods of jams, the team with the most points wins.

Besides the basic game-play there also are myriad rules skaters must follow or be forced to sit in the penalty box for improper play.

Turns out there are a lot of rules in roller derby.

"I've been playing for almost three years," Cox said when asked about the complexity of the game. "It takes a good while to get the mentality for it."

After getting fully geared up it was time to try some skating techniques. While the Rollergirls were practicing formations and plays, I was trying to remember how to move around on wheels without falling.

I did find that skating came back to me rather quickly, sort of like riding a bike. Never knowing how to properly stop when I was younger, though, Team Captain Patty "Knick Knack Patty Wack" Sebert told me it was time to learn.

My method of rolling into a wall when wanting to slow down wouldn't cut it as a Rollergirl.

She showed me two stopping techniques, the "T-stop," where you drag one skate behind you to slow yourself down, and the "plow," where you turn your skates inward to make a "V" shape. Then we skated around the track while I tried them out.

I started to get a little too confident after some success, which led to the moment for which I'm guessing everyone was waiting. While attempting the T-stop maneuver, somehow both my feet rolled out in front of me. I flew up into the air, landed on my back and hit the floor with a loud thud.

Fortunately, I did not break any bones but I did jam a couple of fingers trying to catch my fall, so I was content to watch the rest of the practice from off to the side. 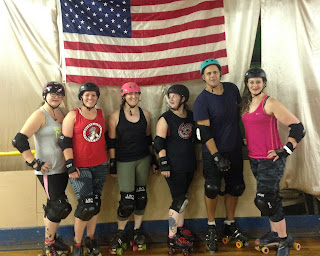 The Mississippi Rollergirls play home games at the Duo Dance Event Center, 3100 Ladnier Road in Gautier. Tickets are $10 in advance, $12 at the door, and kids 10 and under are admitted free. Rollergirls also offer a military discount. This season's remaining schedule has bouts set for May 21, July 23 and Sept. 10, and Boot Camps will resume after the season. For more information, visit www.mississippirollergirls.com. 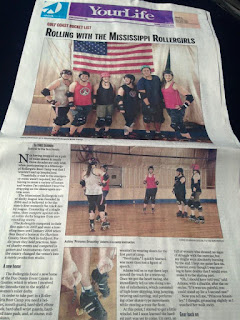