When racing in a car going close to 110 mph in a little over 12 seconds, there's a good chance it will get your adrenaline pumping.

I learned that heart-pounding fact firsthand when I paid a visit to the Gulfport Dragway for my latest Gulf Coast Bucket List adventure and unexpectedly ended up in the passenger seat of a dragster.

Gulfport Dragway has been host to amateur and professional racers from around the country since the early '70s. Originally named Magnolia Raceway when the track was built in 1971, it has gone through a few different names and owners over the years.

The current owner is Theresa Reese, who has had it for a little over three decades. She said she was not necessarily a racing fan when she and her then-husband bought the track. They just wanted to own their own business.

The track is a mile long, but the races are generally one-eighth mile or the more popular quarter-mile. The track originally was a dirt road but now is smooth asphalt. The starting line, however, consists of a layer of rubber on top of concrete for better tire grip upon takeoff. 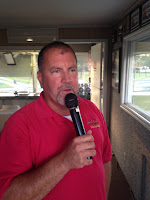 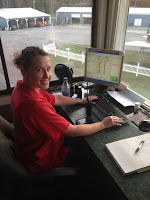 When I arrived at the track, I visited the announcer's booth. I met computer operator Jessica "TB" Jerone, and announcer Monte Caldarelli, who filled me in on the particulars of drag racing. I learned there's more to drag racing than just pitting two cars against each other and seeing who's the fastest.

There are two different types of drag racing. One is called "heads-up" racing, which I assumed was the way all drag races were run, in which two cars line up, and when given the go signal, take off to see who reaches the finish line first. The other is called "bracket racing," which is the type of races they were running on the Wednesday I visited.

Bracket racing is the most equal opportunity sport in the world, as men and women, young and old, have an equal chance of winning, because it doesn't matter if your vehicle is fast or slow, as all races are based on a system where the slower car gets a head start. 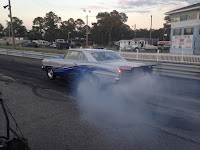 The slower car is determined after a series of time trails, otherwise known as qualifying laps. For the first few hours of each race day, the racers take three or four practice runs to learn their elapsed time, or "ET," from start to finish. Those are given to the drivers on a computer printout to study and then try to predict what their cars will run during elimination races.

After studying the data the racers put their guesstimate, or "dial-in time," on their window with shoe polish. Jerone then enters that information into the computer to relay to the starting line computer, which is used to determine which racer gets the earlier, head-start go light.

"That's what makes everyone equal," Caldarelli said. "You can have an 18-second car and a 10-second car. If mama's mini-van runs 18 seconds, she's going to get an 8-second head start."

After leaving the announcer's booth I was escorted to the starting line, where I met Track Manager Jeff August. Surrounded by the smell of smoke and burning rubber coming from cars spinning their tires in order to get them sticky for traction, I attempted to ask questions of August in between the sounds of roaring engines. 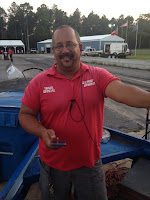 "On a Wednesday night you'll get 7-second dragsters, all the way to grandma's Ford," he said.

My tour of the track continued via a golf cart driven by Harrison County Lieutenant Herbert Roles, who handles security. After a pit stop at the Sno-Zone to get a snow cone, I asked Roles what he likes best about working at the track. 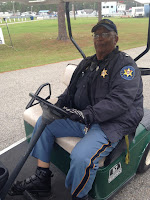 "It's like one big happy family," Roles said. "Everybody knows everybody."

We next went to the finish line's ET shack, where they give racers printouts that show how fast they're going at different times down the track. Seeing the results made me curious how fast my own car might go, so I asked if I could make a run with my Pontiac G6 four cylinder, which I purchased for fuel economy, not for speed. Without hesitation the answer was yes.

Before heading to the starting line, I met with part-time race announcer and fuel seller Steve Kanter, who offered some guidance. 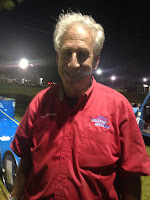 "If you never have been down this track before, I'll give you the same advice I give everyone: Take your time," Kanter said. "Drive 60 mph and just be careful. Don't go really fast. Take your time and enjoy the experience."

I nodded my head in acknowledgment, but knowing that I most likely would have to share my time with others, in my head I knew I was going to go as fast as my car would let me.

I felt a mixture of nervousness and excitement as I pulled up to the starting line. Ahead of me was a lit track leading off into the eerie darkness of night. With hands at the "10 and 2 positions," I watched as the starting light counted down to green, and then floored it -- 12.76 seconds later -- reaching speeds of 82.36 mph -- I crossed the finish line with a smile on my face. 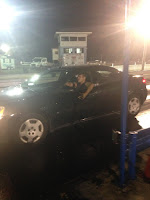 That smile quickly turned into one of anxiety, as no sooner did I get my ET printout, I was told to hurry back to the starting line, so I could experience a ride along in a "real" race car.

Hastily strapped into the passenger seat of an extremely loud 1969 Chevelle being driven by race car driver Glen Price, I kept telling myself something I heard earlier, that accidents very rarely happen, and that no one has ever died at this track. Saying a quick prayer before takeoff, I held onto the roll bar above me as we sped down the track reaching 109.76 mph. 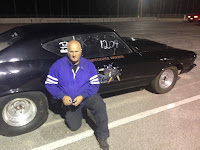 After thanking Price for keeping me alive, I left the track with a satisfied grin plastered on my face.

The Gulfport Dragway is located at 17085 Racetrack Road and has races scheduled every Wednesday year round, with a winter break the week before Christmas through January. There are also special event weekends, including a highly entertaining burnout show called Hazardous Waste. For more information, call 863-4408 or visit www.gulfportdragway.com. 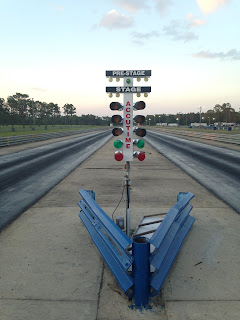 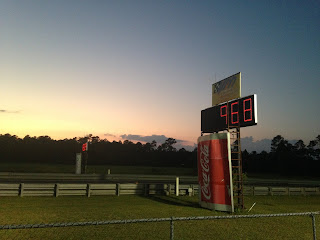 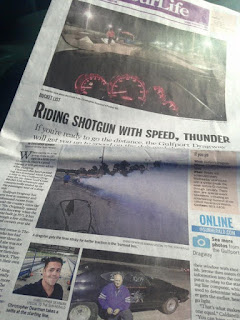 Chris sailing on a Biloxi Schooner