Taking the helm of a 65-foot Biloxi oyster schooner isn't something I ever imagined I would do in my lifetime, but that's exactly what I did recently for the latest Gulf Coast Bucket List adventure.

My day on the water came courtesy of the Maritime & Seafood Industry Museum, established in 1986 to preserve the maritime history and heritage of Biloxi and the Mississippi Gulf Coast.


The Museum owns and operates the Glenn L. Swetman and the Mike Sekul, two authentic replicas of Biloxi oyster schooners that sailed during the late 1800s to the early 1900s. Those wooden, two-masted vessels, also referred to as white-winged queens, recreate the original vessels that were built to navigate the shallow water along the Mississippi Gulf Coast and were used by the seafood industry to harvest both shrimp and oysters.

When I arrived at the Schooner Pier Complex where the two schooners are docked, I was met by Capt. Ron Reiter, Capt. Brandon Lauer and deckhand Burke Patterson, all of whom were busy preparing the "Glenn L. Swetman" to embark on an afternoon cruise. The Glenn L. Swetman was built by Biloxi native Bill Holland and is named after the deceased founder of People's Bank, who played a major role in bringing about many well-known Biloxi institutions.

Eager to lend a hand and get a feel of what goes into readying for a day of sailing, I asked the guys what I could do to help. They quickly put me to work scrubbing the deck with a mop, which I learned is done after every trip in-between the weekly deep cleanings. After enduring a few jokes at my expense for the free labor, I was ready to learn a little more about the Biloxi schooners, other than what it took to keep them looking pretty.

Reiter, who's originally from Toledo, Ohio, and now lives in Gautier after spending 10 years living on a boat cruising up and down the Coast with his wife, offered to give me a tour of the schooner he's been a full-time captain for the past eight years.

"We kind of picked this spot because we thought it was one of the best kept secrets on the Coast," Reiter said of his decision to relocate to the Mississippi Coast nearly 30 years ago. "It just feels comfortable."

Reiter took me underneath the deck to show me the small shelter cabin, which primarily is used for storage and houses the head, i.e. a bathroom. He then showed me the engine room. At first I was confused as to why a sailboat would need an engine, and Reiter told me a motor is used to take the schooner from the dock out into the open water, for times when there's a lack of wind and in cases of emergency.

After we climbed back up on deck, the guys said it was time to set sail. After a quick tutorial from Patterson and in response to Reiter's hand signal, I threw one of the ropes that kept the schooner tied to the pier overboard, and we were on our way.

Patterson, who originally is from South Carolina, has been working on the schooners for the past two years.

"I didn't know I loved it until I got on this boat, to be honest with you," Patterson said of his work. "I had never stepped foot on a sailboat until this one. Brandon said he needed another part-time guy, so I came down. My entire boating career up until that point had just been on my family's large motor
boats."

While Patterson may have been a deck hand for only the past two years, it is obvious he is a pro when it comes to working the rigging. Once we got out of the bay, he informed me it was time to hoist three of the vessel's six sails that we would be using that day. Grabbing a hold of the long ropes coming down from the mainmast, we stood on each side, then used muscle and body weight to raise the sails in place. From that point on we truly were "sailing."

After having the opportunity to take part in some of the deckhand duties, I asked Lauer how long it takes to become a schooner captain. He told me that while it isn't necessary to go to Captain School as he did to pass the Coast Guard test, you do need to complete at least 360 days of sea time for an inland captain license, and 720 days for a near coastal captain license.

Since I didn't have that much time or patience to try my hand at steering the ship, I asked the guys if we could forgo all that work so I could at least say I tried it. Surprisingly, they said yes, and I went to the back of the boat, called the stern, to learn how to man the schooner's wheel.

Patterson told me to make the "Captain Morgan" pose for a cool photo opportunity. Then Reiter explained that the wheel turns the rudder, which in turn steers the boat. I also learned that the reason the wheel is located in back is so you can keep watch on the sails, which at times are either pushed or pulled by the wind.

While gliding over the Gulf water I asked Lauer, who moved to the Coast at the age of 9 from Connecticut, what his favorite part of working on the Biloxi schooners for the past five years was.

"You get out and all you hear is the wind and the waves," Lauer said. "You don't have to listen to the engine rumbling. It's just so relaxing and peaceful."

I wholeheartedly agree, especially after looking around and enjoying the serene surroundings and magnificent view of the Mississippi coastline.

The famous Biloxi schooners are available for day sailing or charter year round and can accommodate weddings, dockside parties, receptions, birthdays or other special events.

They are docked at the Schooner Pier Complex at 367 Beach Blvd. in Biloxi.

Be sure to make your reservations for the Christmas on the Water Boat Parade on Dec. 6. For more information, call 435-6320 or visit www.maritimemuseum.org 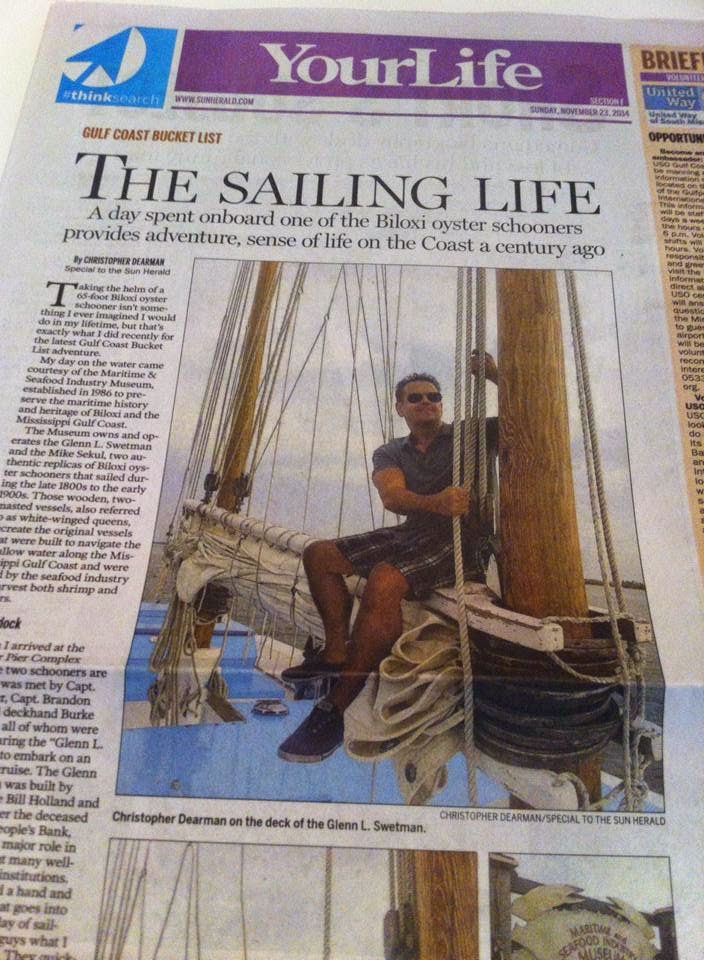