Continuing my quest of trying to stay young with a milestone birthday rapidly approaching, I figured a visit to Biloxi's Big Play Family Fun Center might be just the place to let my inner child run wild with a playful afternoon of fun.

Having opened May 2010, this is the fifth year that Big Play Family Fun Center has hosted a variety of attractions for all ages. It features mini golf, bumper cars, bumper boats, Go Karts, inflatable water slides, an arcade and other activities for locals and tourists alike.

When I arrived at Big Play, I was greeted by assistant manager Lauren Atchison, who was born and raised in Biloxi and has worked at the Family Fun Center for the past three summers while attending USM. Atchison offered to take me on a tour of the property and show me all the fun things Big Play has to offer.

We first headed to the Adventure Park, which includes their Boot Camp Obstacle Course, a bounce house and multiple slides, one of which is billed as the World's Largest Inflatable Water Slide. Atchison told me that, together, they comprise the Unlimited Fun package, which also includes 10 water balloons to be used at their Water Wars attraction. Being it was early afternoon and extremely hot outside, the thought of playing with water balloons definitely got my interest, so I asked to get a firsthand look at what Water Wars was all about.

Atchison brought me over to an area that houses two sling-shot stations and introduced me to Hunter Necaise, who told me it was his first year working at Big Play. He explained that up to four people can compete at Water Wars, two on each side, situated about 20 feet apart. The object is to launch water balloons at targets located above your opponents. Hit a target, and a large blast of water shoots out from in front of each station, drenching your adversaries. With the sweat pouring seemingly nonstop from the incessant heat, I'll admit, part of me was hoping I'd lose, as I'd welcome a cooling off soak. 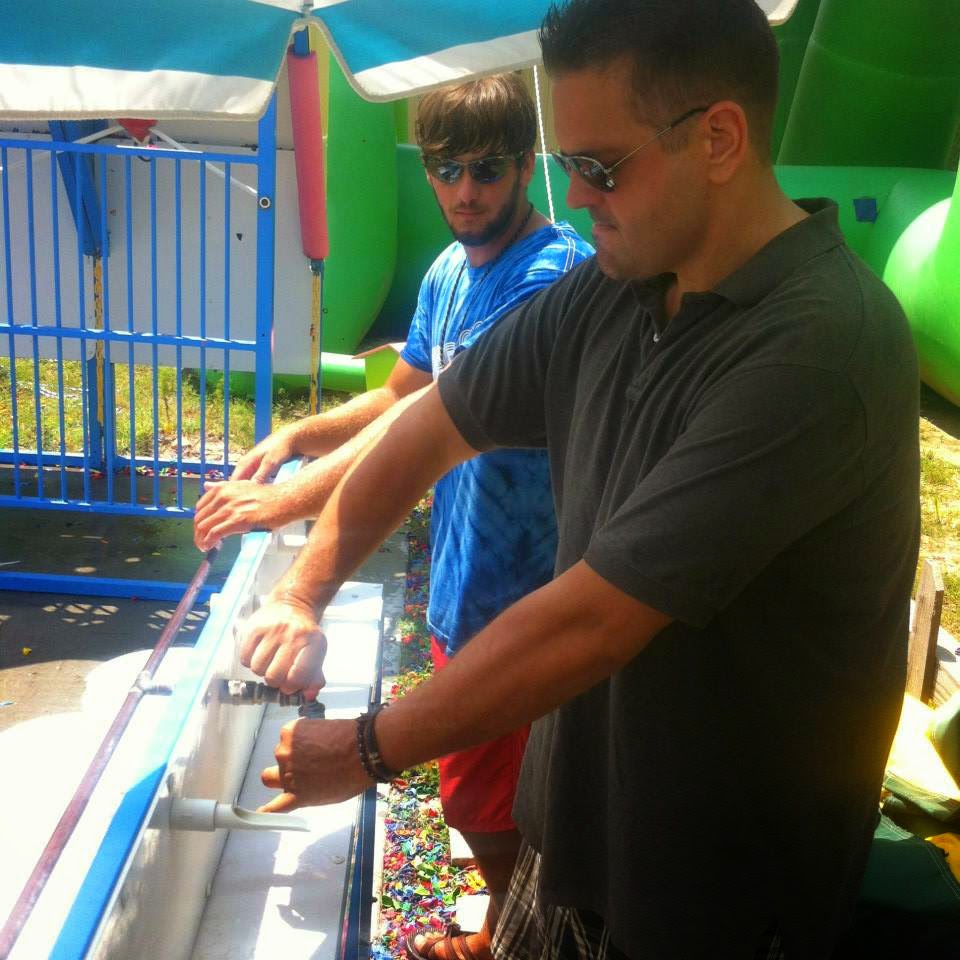 While learning the method of tying the balloons around a special PVC pipe to speed up the process, Necaise told me that they usually go through an average of 3,500 water balloons on busy weekends, although not all are used by just the customers.

"When kids are playing we'll sometimes grab a couple and just sling them at them, just to get them wet, because little kids don't always quite get them there," he told me with a smile. After stating that I could see why that could add to making the job fun, he said, "It's the best summer job I've ever had!"
Snak Shack

While I cooled down a bit during my Water War battle -- the air-conditioned Snak Shack was right next door -- I asked Atchison if she would show me inside. The Snak Shack sells all sorts of tasty concessions, including pizza, nachos, hot dogs and ice cream, but what really caught my eye on this hot day was the snowball machine.

Wanting to get a hands-on lesson, I asked Atchison to walk me through how the "Southern Snow" device works. I learned it's a relatively simple, albeit quite loud process, in which the machine mechanically shaves a big block of ice into an awaiting cup. After the cup is filled, all that's left to do is pick out one of over two dozen bottled flavors, and pour it over the ice chips. Picking out my favorite flavor, cherry, it was the perfect treat for going back into the heat.

Best part of the job?

While walking over to the next set of attractions, I asked Atchison what is her favorite aspect of working at Big Play. "I honestly love everything about working here," she said. "I think just meeting people is my biggest thing. Seeing the customers and helping them. That kind of thing."

We next went over to what Atchison said was one of the most popular attractions, as well as her personal favorite, the bumper cars. When asked why this was, she told me that at night they turn on flashing lights and play music, which usually draws in the customers. That, and it's just plain fun to ram cars into people.

Not having any customers around at the time, I asked new employee Andrew Hanlin if he didn't mind taking a little break from being ride operator. Jumping in one of the cars to be my rival, his willingness reminded me a bit of my younger self. It brought me back to my days working my first job at a Christmas themed amusement park.

After Hanlin and I took turns ramming cars into each other, I asked him what he liked best about working at Big Play. He simple said, "It's just awesome!"

Meeting back up with Atchison for the last part of my tour, she demonstrated how the Kiddie Bumper Boats worked, let me play a round of mini-golf, as well as spend time in the newly expanded arcade. I also got to pick out a mystery bag to use at the Mining Sleuth attraction, where guests can replicate panning for gold. After washing away the dirt in a cascading stream, I was left with a bag full of colorful "gemstones."

When the tour was concluding, I asked Atchison what the future holds for Big Play Family Fun Center. While she said she had to keep mum on the details, she did tell me that owner Brandon Wooldridge is always looking to expand, so hopefully we'll be seeing something new next year. She also told me to keep an eye out for the next season of CMT's reality show "Party Down South," as the cast was filmed when they paid a visit this summer. 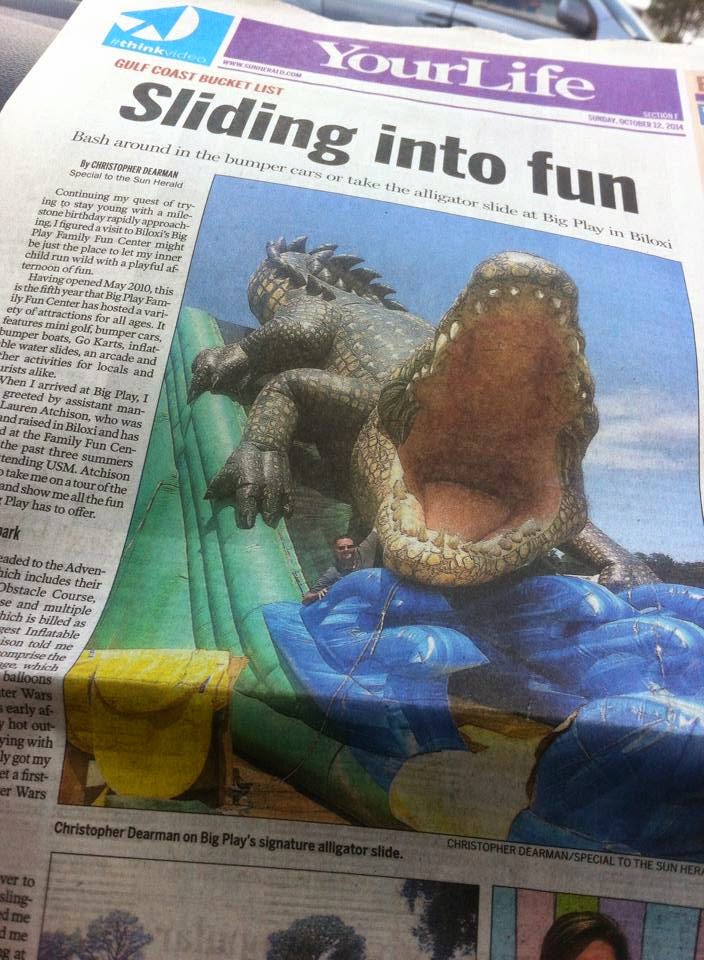 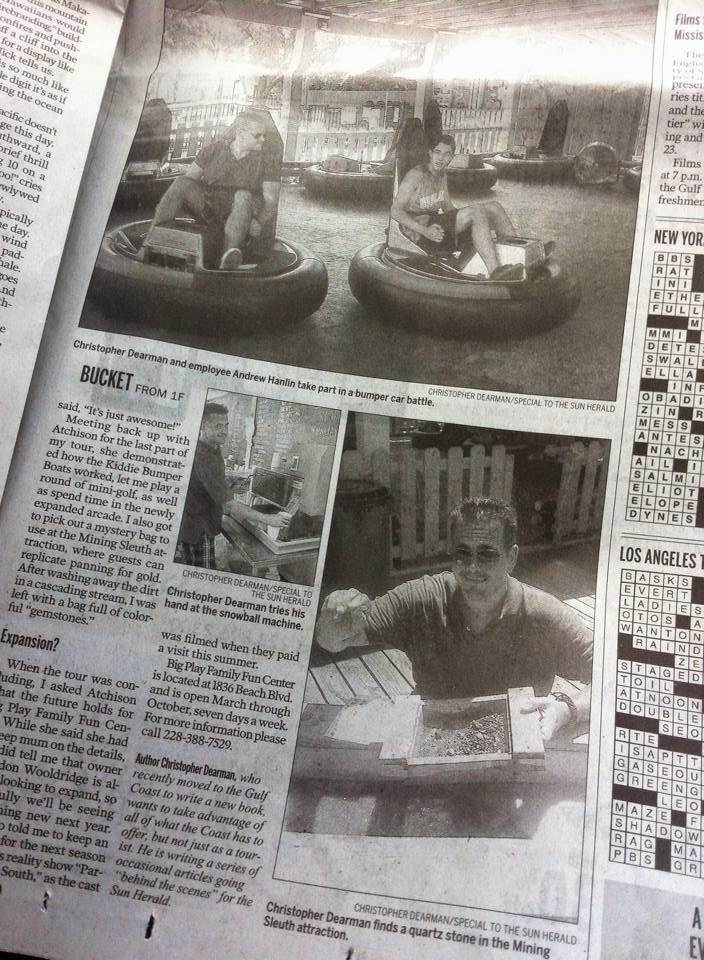