On Monday, I found myself in front of "Hollywood" cameras, potentially heading for the big screen.
It started a little more than three weeks ago, after I read a story in the Sun Herald about a call for extras for "Mississippi Grind," a gambling-themed comedy-drama starring Ryan Reynolds, Sienna Miller, Ben Mendelsohn and Analeigh Tipton being filmed in Mobile, the Mississippi Coast and New Orleans.

Casting
I emailed the casting director and got a reply asking if I would be available to work as a dog track patron, filming at the Mobile Greyhound Park in Theodore, Ala.. Having a rare Monday off, I figured it must be fate. They chose the 40-year-old dog track in Theodore to stand in for what will take place in Iowa in the movie.

On the set
When I arrived at the location with my designated two changes of personal clothing, I saw 40 or so people ranging from their early 20s to late 70s. I sat at a back table waiting to hear from the production assistant what our day would entail.
The production assistant said we were not to speak to the talent unless spoken to, and although you can look at the actors, don't make eye contact during a scene, as it may throw off their concentration. It was also OK to have your phone with you to kill time between scenes, but absolutely not to take any pictures. About an hour and a half after arriving, we were told to start heading downstairs to where the filming was to take place.

Star sighting
After an hour or so of doing nothing, I finally saw Ryan Reynolds and Ben Mendelsohn had made their way to the area and were talking with the directors at a table behind me, obviously working out a scene that was to take place there. This got most of the extras excited to see the movie stars so close, but I immediately was disappointed that only my back would be seen in this arrangement.
My disappointment grew when various people around me were placed near the table where the stars were to say their lines, or to walk through the area during the scene.
During the run-through, I befriended an extra named Jeremy Harlan, who tried taking a picture of Reynolds with his phone. He was immediately scolded by what turned out to be Reynolds's stand-in, and was told it was "not professional" to do so. Later I learned this was a common occurrence, although a bunch of extras ended up sneaking shots of various quality throughout the day, trading them with each other after filming was completed.
Filming begins
The actors left to change into costume, then returned in character and filming began.
After the first scene behind me was shot many times, I found out the actors walking by me were actually going to be filmed. I was told to let them pass by, wait about three seconds, then start walking to where they were watching a race. I was to pause, look up at the row of monitors, then walk by right behind them as they were cheering on a long-shot dog they bet on named "Rainbow." It seemed simple enough, but I'll be honest, the nerves did start to grow.

After a few walkthroughs, the cameras rolled, and we shot the scene numerous times. It is all a bit of a blur, but thinking back on it now, I'm debating whether the highlight for me was Reynolds saying "excuse me" as he walked past on camera, brushing my shoulder to get by, or seeing him singing a few bars of an iconic song from a classic movie during the scene after his character learns the race results. I'll leave the results and the song as a surprise for when you see the movie, but I will say he did a pretty good job with the tune.

Brushes with stars
My only other interaction with the male stars -- unfortunately, the attractive female stars were not filming that day -- came during a late filming break. I was smoking a cigarette to calm my nerves, and Reynolds and Mendelsohn were relaxing off to the side, talking with a production assistant. When they got up to re-enter the building, I held the door open for the lady, and as the other two were following her in, kept it open for them. In unison they said, "Thank you, sir," and with that I had something to brag about on Facebook when detailing my on-set experience. I'll have to wait until next year to see if I make into the film.
For more pictures of my Mississippi Grind set visit please visit the Gulf Coast Bucket List Facebook Page here. 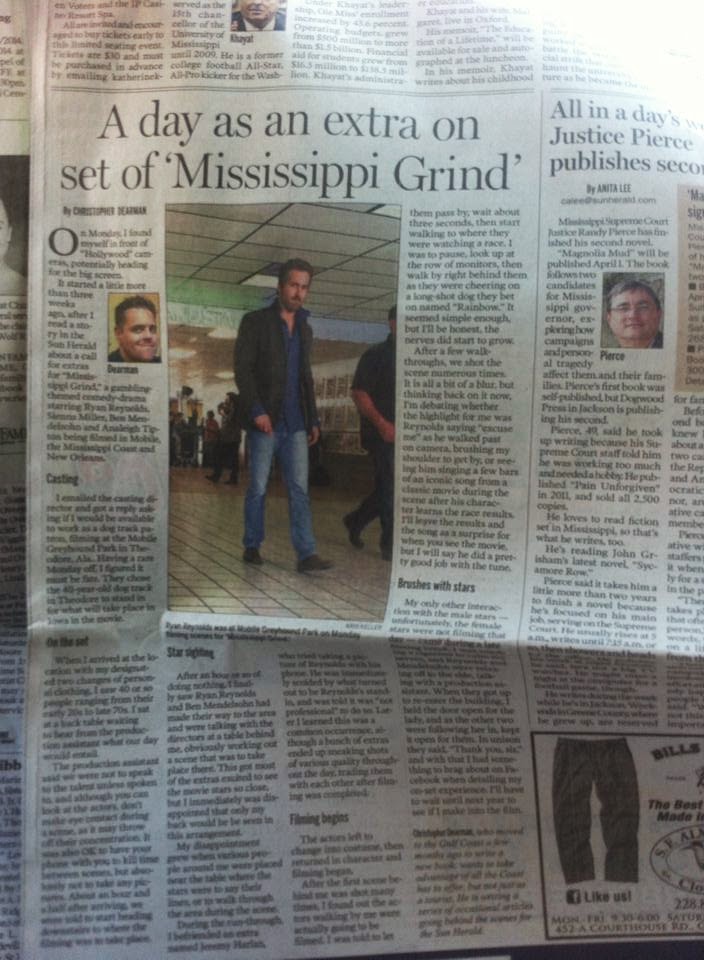